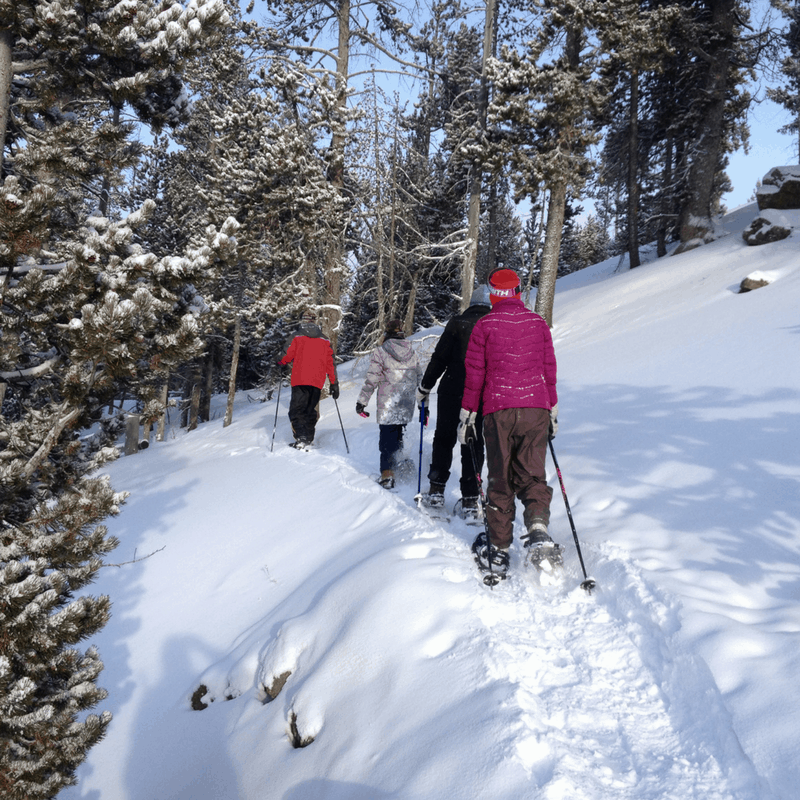 Bundled against the sub-zero temperatures, we left the cozy warmth of our cabin to brave Yellowstone’s deep winter chill. At twelve below zero, the temperature was up seven degrees already that morning from the previous afternoon’s negative nineteen. After fumbling over my own thick, clumsy fingers to fasten snowshoes to boots, I wondered what kind of people would take their children into the woods in such weather.

My husband and I, apparently.

We set off across the expanse of barren parking lots and abandoned roads toward the pines on the other side, snowshoes slapping the ground under our feet. As we approached the Visitor Education Center, we saw Old Faithful’s crowd dispersing and a ranger posting the next predicted eruption.

We walked against the crowd and followed the boardwalk as it curved around the geyser. On the back side, a narrow trail slipped into the woods. We followed it, pausing on the Firehole River’s wooden footbridge to search the water for otter and trout. We didn’t stop for long. Our object was to reach Observation Point before Old Faithful’s eruption, to see it within the context of the Upper Geyser Basin and the sloping mountains which cradled it. 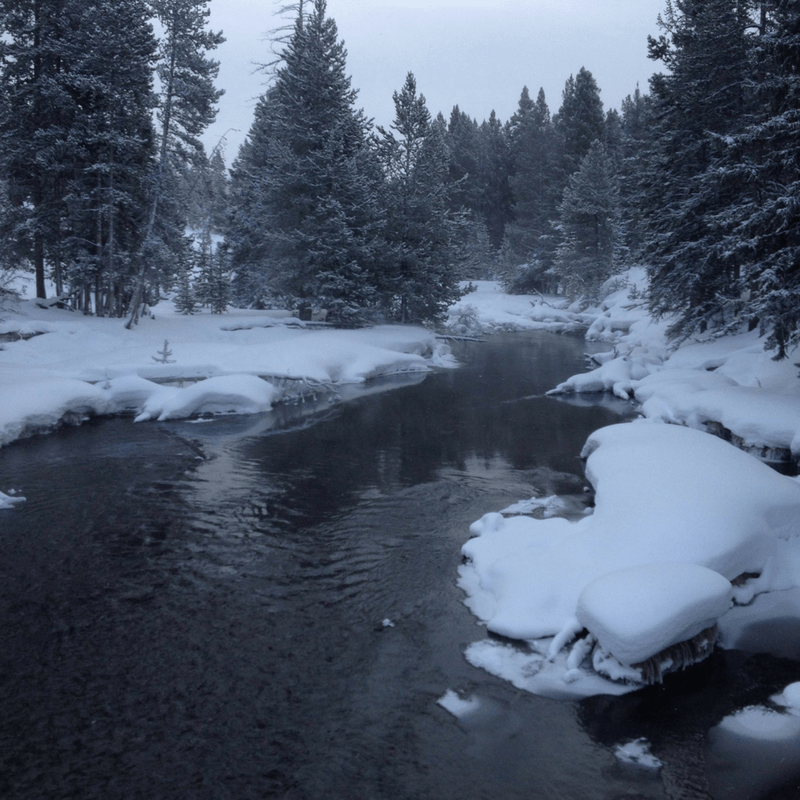 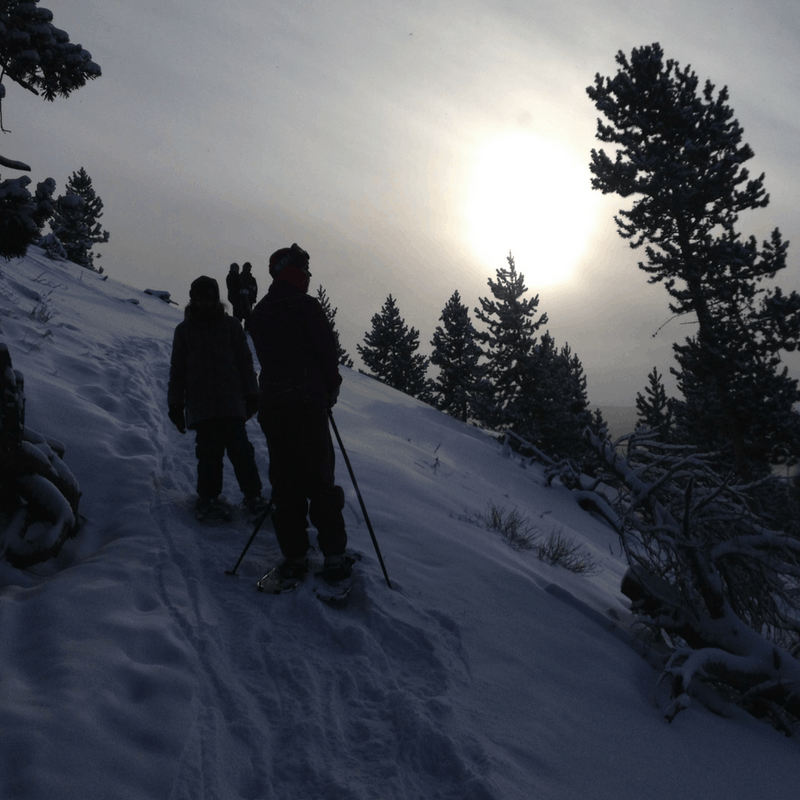 Before long, the trail began to climb. And not long after that, it took a sharp right turn. We’d arrived at the switchbacks.

By this time, our youngest daughter had ditched her hat and her hood and the rest of us had unzipped the top few inches of our coats. It wasn’t the temperature that had changed. It was us, and the heat generated by the energy it took to keep us moving. It came from within.

We plodded on in the silence forged by the thick blanket of snow and the shelter of the trees until we reached a place where the pines fell away, creating an opening which showcased the valley below and the sky above.

A few people stood on Old Faithful’s boardwalk and a thread of steam rose from its cone.

J checked his watch. “Let’s go. We want to get to Observation Point before the eruption.” 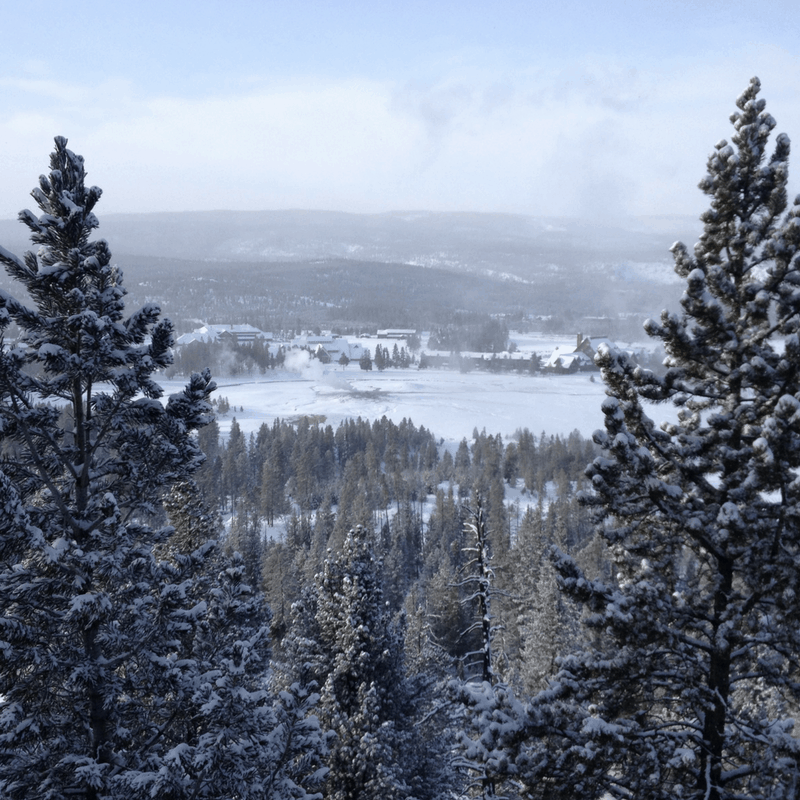 We turned and climbed the last section of the trail, arriving—judging by the filament of vapor and the cluster still waiting on the boardwalk below—before the eruption. We stood alone at Observation Point and watched the steam dissipate into the clouds.

One by one we pulled our zippers back up and began to shift from side to side, our inactivity revealing just how cold it was. J checked the time. We were at the tail end of the predicted eruption window.

Down below, more people advanced toward the geyser. We kept shifting and shivering and trying to keep warm. Old Faithful continued to do nothing but release a little steam. And the crowd on the boardwalk continued to grow.

“Daddy, I’m cold. When are we going back?” our little girl–the one who’d been first to feel too warm–asked.

J looked at her and at me and at the geyser. “Let’s give it a couple more minutes,” he said, knowing that Old Faithful is predicted, not scheduled, and that it sometimes is—according to our way of thinking—late.

A minute passed. And then another. Minutes in which the profound cold worked its way through the slim shield our down and Thinsulate layers provided against it.

“Let’s head back,” J said, reluctance heavy in his voice.

When we turned and descended the trail, the movement warmed us. And more quickly than it brought us up, it returned us to the boardwalk where we found the gathered crowd still waiting.

We joined them for as long as inactivity allowed. Eventually, though, we had to move on, to accept that the adventure that morning was not seeing what we wanted to see; it was the wandering, the watching, and the waiting in the wilderness in a way we’d not done it before.

It isn’t only in Yellowstone that I set off with specific ends and expectations in mind. I charge into my actual, everyday life that way, too, and I would guess I’m not alone. We set off down our life’s road for destinations we occasionally reach without incident, sometimes not at all, and often after a series of detours and delays. 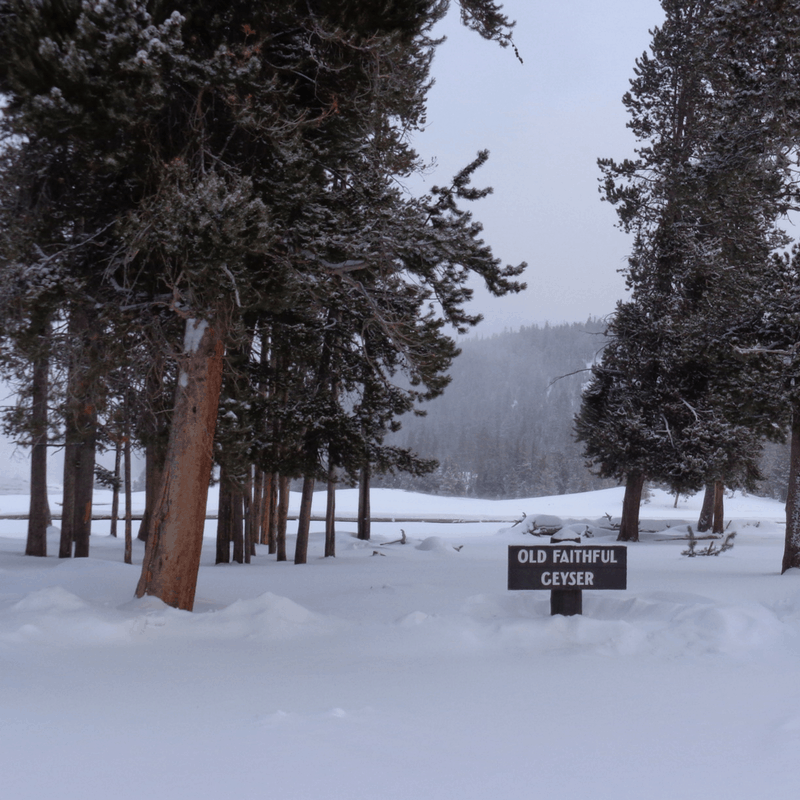 That’s the thing about destinations. We’re always finding our way and, almost as often, waiting for something. There’s an art to knowing when to stop, how long to stay, and when to move on. I’d prefer a map–one to specify the exact way, pinpoint road closures, designate the fastest detours, and predict my exact arrival time.

These still-early days of the new year are often accompanied by the hope of new beginnings and fresh starts. It’s a good hope, one not reserved for a particular day.  Morning brings the promise of God’s new mercies, a fresh beginning for every single day, even–or perhaps especially–when we find ourselves waiting.

And you, Fellow Traveler?  What does pressing on look like in the midst of your waiting?

5 thoughts on “For When We Find Ourselves Waiting”