After clocking out from the early shift at the gift shop, I left the Inn for a long, leisurely stroll through the Upper Geyser Basin. Beginning at Old Faithful, I walked past lesser-known features and family favorites as I made my way to my destination: Morning Glory Pool. I didn’t need to invest any thought about how to get there. The boardwalk laid the course and I followed. Signs along the way were clear: STAY ON THE TRAIL. 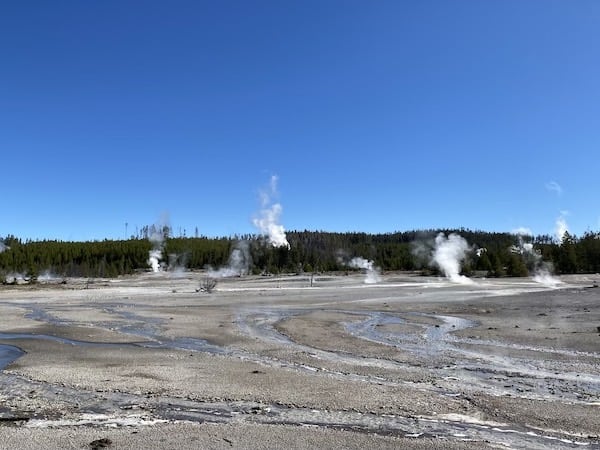 In some areas, the thinnest of crusts separate our frail human frames from the seething intensity below. Danger or not, signs or not, occasional park visitors stray from the boardwalk. For some, curiosity drives them to get just a little closer, to see just a little better. For others, responsibility propels them to retrieve the hat that blew off their—or someone else’s—head. The unfortunate ones have broken through the surface, suffering serious burns to their feet or legs from the scalding water or—worse—hot, clinging mud simmering below. A few have died.

I don’t need to be convinced to stay on the trail.

Few of Old Faithful’s visitors expend the time and energy required for the long haul to Morning Glory Pool so I sat alone in the rising mist. After lingering in the stillness, I turned from the steamy water to return to the Old Faithful Inn, relishing the wilderness solitude on my way between one stop and the next. I was within sight of the Inn when I noticed—out of the corner of my eye—I was passing by a bison. She, all half-ton of her, sat primly just an arm’s length from the boardwalk—putting me far closer to her than the twenty-five yards required by the National Park Service.

Scalding water isn’t the only danger in the geyser basins.

Bison are wild. Whether seated placidly or standing and standing and pulling up one mouthful of grass after another, they look docile. Looks deceive. They are fast, grumpy, and unpredictable. They can outrun a human, gore with their horns, and toss an adult into the air like a doll. National Park Service guidelines aside, wisdom warns against close proximity.

This, unfortunately, bears a strong similarity to how I’m prone to live. It isn’t that I purposefully leave the safety of the path when I’m traveling through dangerous terrain. It’s that I don’t pay attention to the landscape of my life. I just walk, oblivious to the trouble lurking an arm’s length away. As the omnipresent pressures of the day build, I find myself doing what I don’t want to do, reacting with fear rather than faith, veering off course.

We’re travelers, you and I, making our way through the landscape of life. Our sojourn is epic and sweeping in the grand scheme, monotonous and mundane in the day-to-day. Our steps matter.

At least the language of the Bible says so. Walk worthy of the calling to which you’ve been called. Walk by faith. Walk as the wise.

When it comes to “we walk by faith, not by sight,” I tend to believe the big hindrance is the “not by sight” part. But the difficulty isn’t that I want to see where I’m headed. It’s that I don’t pay attention to what I’m walking through.

Those difficulties, disappointments, and even dangers that accompany each day, as inevitable as the sunrise? You know the ones. The toddler’s temper tantrums. The squabbling children. The illness we just don’t have time for. The chronic conflict that’s unexpectedly arisen in a previously tranquil relationship. The low-grade anxiety that just won’t go away. These are the bison that linger near the path that leads through the landscape of life, the things we walk through by faith—or not. 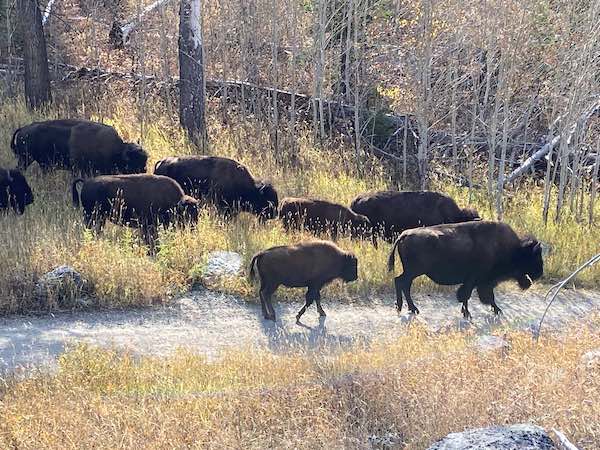 You and I know there’s no formula for walking by faith, but after decades of wishing sight was part of the equation, here’s what time on the trail is teaching me: We’re not called to a general walk of faith. We’re called to navigate the small specifics, to take intentional steps through the inconveniences and irritations, conflicts and chaos along the way. This life is more often a series of small moments calling for small faithful steps than big events requiring large leaps of faith.

We may still want that formula, that list of Six Simple Steps for Walking by Faith. And we may still want to see the end at the beginning. For now, though, let’s practice the art of awareness: remembering the general destination, paying attention to the bison in their various forms along the trail, and fixing our eyes on Jesus—the foundation of the faith we’re called to walk by.

For now, though, let’s practice the art of awareness: remembering the general destination, paying attention to the bison in their various forms along the trail, and fixing our eyes on Jesus—the foundation of the faith we’re called to… Click To Tweet This life is more often a series of small moments calling for small faithful steps than big events requiring large leaps of faith. Click To Tweet

6 thoughts on “Our Steps Matter”