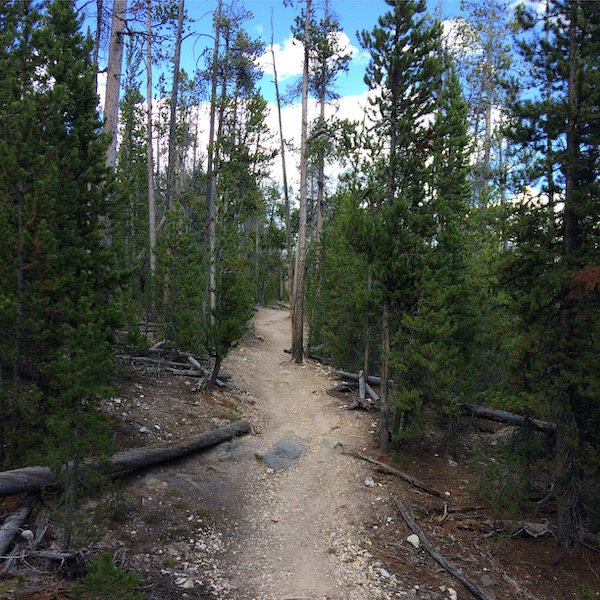 My husband and I set off into the woods at a brisker than usual clip. Sooner than I hoped, the trail made good on its short-but-steep reputation. After a short lag, my steps slowed because there was no way I could keep that pace at that grade all the way to the top.

We’d tried this trail before, when we were inexperienced and unprepared for May’s unmelted snow. We hadn’t gone far before we gave up—shoes sodden and pants soaked to the knees. Twenty years later we were back, on a quest to complete what we’d started all those years before. It was September. The trail was clear of everything but shadows that fell from the filtering pines.

Two obstacles stood between us and success: the clock and me. The clock because we were alternates for a tour that began in less than enough time to complete the trail and get where we needed to go. Me because of pace and commitment issues. First, I don’t really have a high gear. Second, it’s just a little too easy for me to turn back on steep hikes—especially if there’s something else I want to do waiting in the wings.

Between our need for speed and my penchant for not persevering, setting off was something of a risk.

Our destination was Monument Geyser Basin. While I was a repeat observer of Yellowstone’s well-known thermal areas, I’d never seen a backcountry geyser basin and I wanted to. So, pushed as much by the quest as by the clock, I kept on—moving faster than my natural pace and ignoring the calls of my burning quads. Even though I was uncharacteristically committed to finishing this hike, as we rounded switchback after switchback, my mindset devolved. Rather than anticipating our arrival, my focus turned to Just get there already! so we could see the thing, head back to the vehicle, and get on the road.

Still, when the trail flattened, our pace slowed. I paused at a break in the wall of pines. We had, after all, been waiting for this moment for a long time. Stepping through the woodland portal, I took in Monument’s mostly treeless terrain with a sweeping glance.

Continue reading this post at Anthem of the Adventurer.

2 thoughts on “Why Do We Keep Going?”